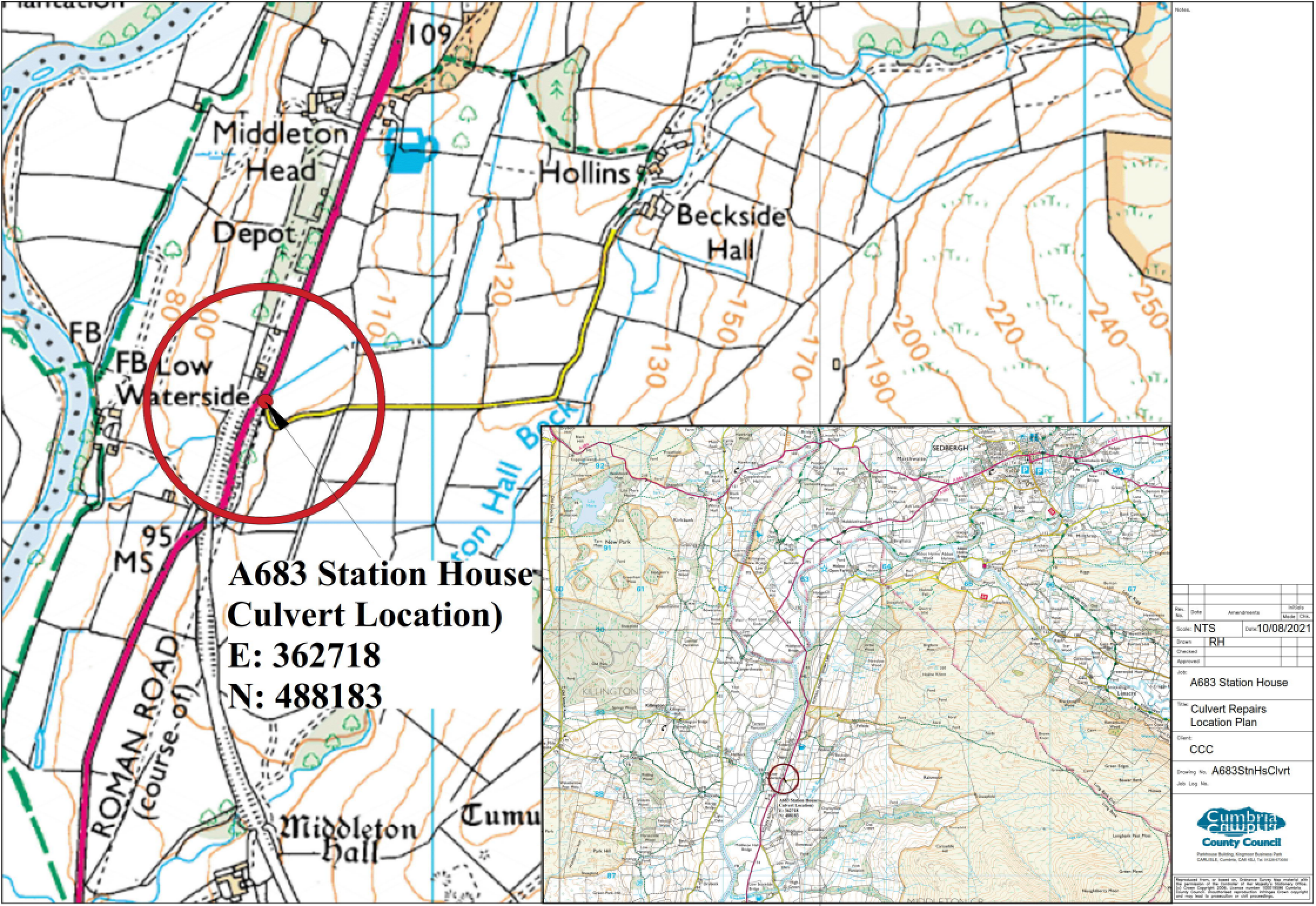 The A683 will be fully closed at Station House, Middleton from Monday 27th September for approximately 4 weeks to facilitate essential drainage works. There will be no way through for pedestrians and cyclists (as there often is for roadworks).

You will see on the plan above that there is a watercourse that crosses the A683 from the east to the west side of the carriageway, opposite Station House and at the junction to Beckside Hall. The watercourse is carried beneath the road in a stone drain, essentially a dry stone construction that will likely have been built with the original road and has now reached the end of its service life.

There have been problems with the culvert in the past, attempts to repair the stonework have been undertaken previously but have proven only to provide a short term solution due to the age and condition of the structure. Recent inspections show the condition of the culvert has deteriorated significantly and it is now collapsing extensively beneath the road. This is a concern, primarily due to the threat to the structural integrity of the carriageway and also due to the flood and ice risk caused by the blockage.

The situation is not going to improve as we move into autumn. If we have a serious weather event there is significant risk of flow channelling behind the already compromised masonry leading to total collapse of the structure and ultimately the road above it. Hydraulic calculations and flood modelling indicate the existing culvert is under capacity which has likely been a factor in the deterioration of the structure.

We have been in discussions with the Local Lead Flood Authority discussing our options for remediation. The consenting team have granted assent for us to carry out works to remove the existing stone culvert and completely replace with new pipes of increased capacity. The consent window for working within watercourses usually closes at the end of September, we have been granted an extension until the end of October. The works must therefore commence on 27th September to provide sufficient time for us to complete the works whilst remaining compliant with environmental regulations.

In order to carry out the drainage works in accordance with current Health & Safety Legislation, a full road closure has been organised and will be in operation 24 hours a day whilst the works are ongoing. As the works require excavation at depth across the full width of the carriageway, it will not be possible for us to maintain any access for through traffic whilst the works are ongoing.

Consideration will be given to directly affected residents of Beckside Hall / Hollins so that access / egress is possible from one side of the junction or the other during the works. Regrettably it is inevitable that works of this nature will cause disruption to locals and businesses in the area. Unfortunately there will never be a perfect time to carry out the works and we would ask for your support and understanding in the delivery of these sensitive yet important drainage works.

Those directly affected by / in the immediate vicinity of the closure will be notified by letter.

The signed diversion for cars will be via A684 Kendal, A591 to A65 Crooklands and A65 to Kirkby Lonsdale. We will not formally sign the motorway as a diversion route because not all traffic is permitted to travel on the motorway. It is understood that locals may see the M6 as the most appropriate alternative route which is a personal choice and fully acceptable.

For cyclists, the diversion would involve crossing the Lune by Rigmaden Bridge (north of Barbon and south of Middleton House), following the lane uphill to a T junction with the Killington lane and turning right, turning right downhill after Egholme Farm and following the lane past the Killington turn-off, taking the right fork at Bowersike and turning right at the T junction with the B6256 to come back to the A683 at Four Lane Ends near Sedbergh.

On foot there is a bridleway from the A683 near Middleton Hall which goes down to the bank of the Lune and back to the A683 just north of the junction with Jordan Lane. This path has been very wet on occasion so please wear appropriate boots.

Advance warning signs will be planted along the A683 itself advising of the upcoming closure.

When this happens, it's usually because the owner only shared it with a small group of people, changed who can see it or it's been deleted.