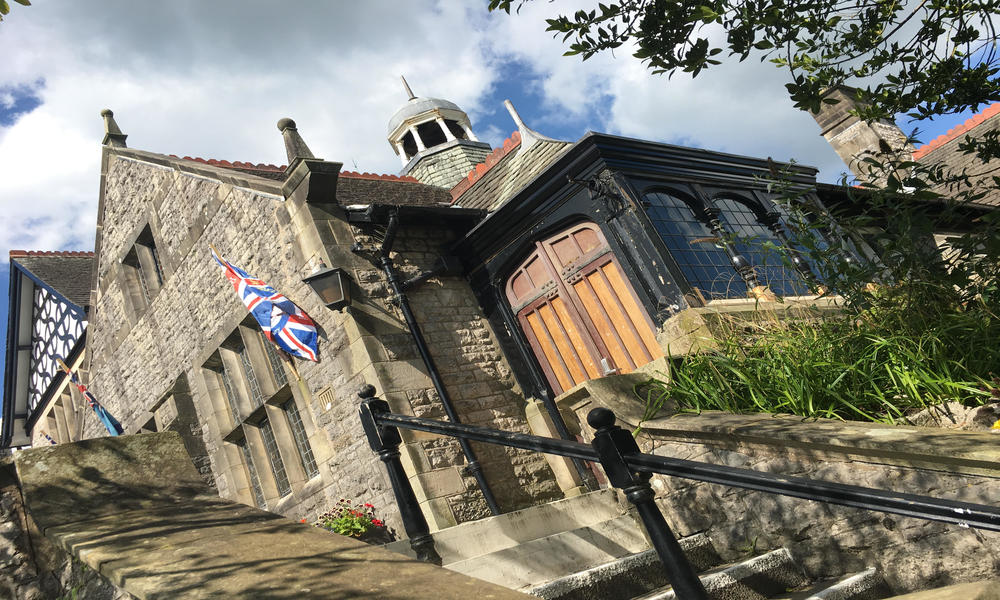 Make a booking on the Lunesdale Hall Bookings page.

Lunesdale Hall has had a makeover. With a new roof, smart sound system and lighting, the town’s historic and beloved hall is open for bookings. Kirstie Pelling checked out its role in the town past and present….

While many venues and buildings have come and gone in Kirkby Lonsdale over the decades, the town’s community centre has remained at the heart of the action. And it’s seen more action than you could ever imagine. From Ken Dodd appearances that went on all night to farces, pantos and St George’s Day festivities, so many characters have populated its history.

A slice of history

Lunesdale Hall was formerly known as Kirkby Lonsdale Institute. According to the Annals of Kirkby Lonsdale it was completed in 1895; “built on land bought from the Underley Estate for £200 with money partly provided by Dr Paget-Tomlinson and Dr Llewelyn Davies, the vicar, and partly with money raised by generous public subscription.”

Chair of Kirkby Lonsdale Town Council and longstanding Hall Committee member Geoffrey Buswell has often given tours to prospective hirers. “When you stand at the door people’s mouths drop open and they say ‘What a wonderful hall!'”

He is very fond of the building himself. “It’s got character inside and out, and one of the best dance floors for miles. And in terms of a village hall it is centrally located with ample parking within walking distance of most houses in town.” He explains the Bective Room was originally known as the Reading Room, “Some of the old un’s still call it the Reading Room. They built the main hall on the side.” Surprisingly the kitchen on the west side was added ninety years after the building was completed.

“Allegedly Llewelyn Davies wanted a room for the young men of the parish which they could use for exercise and games and also for reading, and they were allowed to smoke in there on a few days of the week.” says Patricia  France, Chair of the Friends of St Mary’s. “Hence the name Reading Room. I imagine once the main hall was built, the exercise and games took place there.”

Lunesdale Hall functioned as a community centre from the start and always played a big part in town life. During World War Two it provided overflow classroom accommodation for schools swelled by children evacuated from the North East.

Its history is punctuated with whist drives, rummage sales, pantomimes, Jubilee celebrations and the Golf Club annual ball which always ended with a ‘gallop.’ The Annals of Kirkby Lonsdale describes Mary Pailthorp’s recollection of “dressing up in the evening for numerous balls and dances, which she and her sisters always referred to in the hearing of their strict and perhaps puritanical grandfather as ‘deportment classes.’”

A place where things happen

Miss Pailthorp wasn’t the only regular. “I’ve lived here all my life and I’ve always used it,” says long term Kirkby Lonsdale resident Audrey Wilson. “Gardening Club met there and we went to dances and concerts there. You mention it – everything’s happened there and I’ve enjoyed it all.”

She remembers the time Ken Dodd came to perform and her Father Jonty disappeared until the early hours. “He said he’d sat up till 3 o’ clock in the morning with Ken Dodd and Harry Willan, (the local magician who often appeared at the hall.) They got on like a house on fire – ‘What a time we had!’ he said.”

Live acts were always an important part of the set up. Geoffrey Buswell remembers the Houghton Weavers playing three times, as well as a Simon and Garfunkel tribute and the Hairy Bikers.  “Acts love the hall it because it has a proper stage.”

Local businessman John Short has been a regular on the stage through the years. He recalls being involved in many productions for the town’s drama group including W. Somerset Maugham’s The Noble Spaniard. “The set was absolutely gorgeous.”

A highlight of his career was the comedy No Time for Figleaves. “There were only two men left alive and I was one of them. Poor world! The younger element thought it might have a risqué element to it so we had packed audiences.” he laughs.

A gift from the past

“I loved the place – I still do.” says former Hall Committee Chair Alan Day. “Before you take anything out (of a town) you should put something into it. I wanted to do something for the Institute so I took it over when it was in a sad state. There were a lot of improvements after that including access for the disabled.”

He says many of the features were a gift for a committee keen to improve the venue. “The floor is a very good floor; Canadian pine, like the rest of the woodwork in the building. All this lovely paneling we see now had been covered over and it looked horrible. We brought the original décor to life. The dance floor had to be sanded and made smooth. We tried unsuccessfully to get the building listed so it couldn’t get knocked about and spoiled.”

The Committee’s hard work was rewarded by audience attendance at events. “It was an absolute hive of activity. We had wonderful concerts and there used to be a jazz band which was very popular.” He remembers parties to mark The Queen’s milestone birthdays, and events to commemorate national days. “On St. George’s Day we used to have a roast beef dinner and St. George appeared on his white horse. He stayed for the weekend and went all around town. The 2005 Bicentenary for the Battle of Trafalgar was also a big event – there was a parade and the whole town joined in.”

Lower key highlights include the annual service for Remembrance Day at the flag pole.  “Quite informal but it happened every year.”

A facility for the future

Chair of the current Lunesdale Hall Committee Mike Burchnall says performers visiting in the future will benefit from new technical facilities including new sound and lighting systems. These upgrades are part of a fresh programme of works on the hall. “There are new curtains, and builders were in over the summer working on the roof and door. The Hall Committee has put in a lot of time, forward thinking and energy to ensure this facility is kept smart and in good shape for future generations to use.”

For Audrey Wilson, it’s hard to contemplate the town without its community hub. “We need a facility for things to happen or where else would they happen? You need something central for people to meet together and the hall is that place.” Alan Day agrees. “We’ve got to keep the hall – it is important for Kirkby Lonsdale. If the town wants to stay as a tourist place it has to have this feature. It is a lovely, lovely building.” 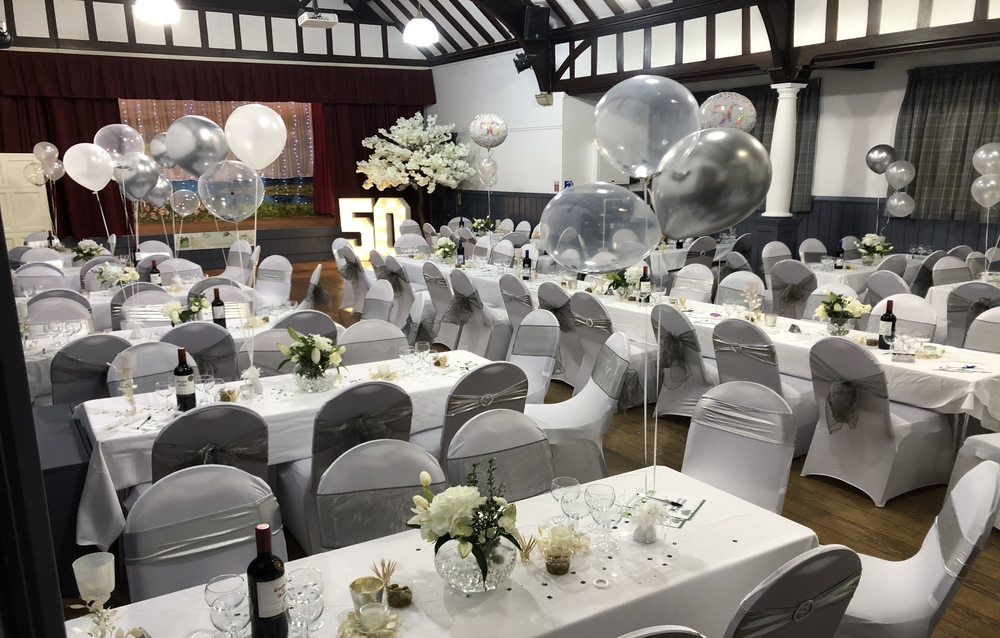 A facility for all

Not everyone realizes how much goes on in the hall. Did you know the upstairs rooms house five therapists who provide a range of services? Check out their Facebook page @thelunesdaletherapycentre.

Regular sports and events  include karate, dance groups, craft fairs and a country market. Meanwhile the current Lunesdale Hall Committee is up for discussing any ideas for keeping the hall busy and occupied – COVID 19 restrictions allowing.

To keep in touch with what’s going on, follow the hall’s new Facebook page @LunesdaleHall, check out this web page, or contact lunesdalehallbookings@gmail.com for a chat about hosting your own society or event at the hall. 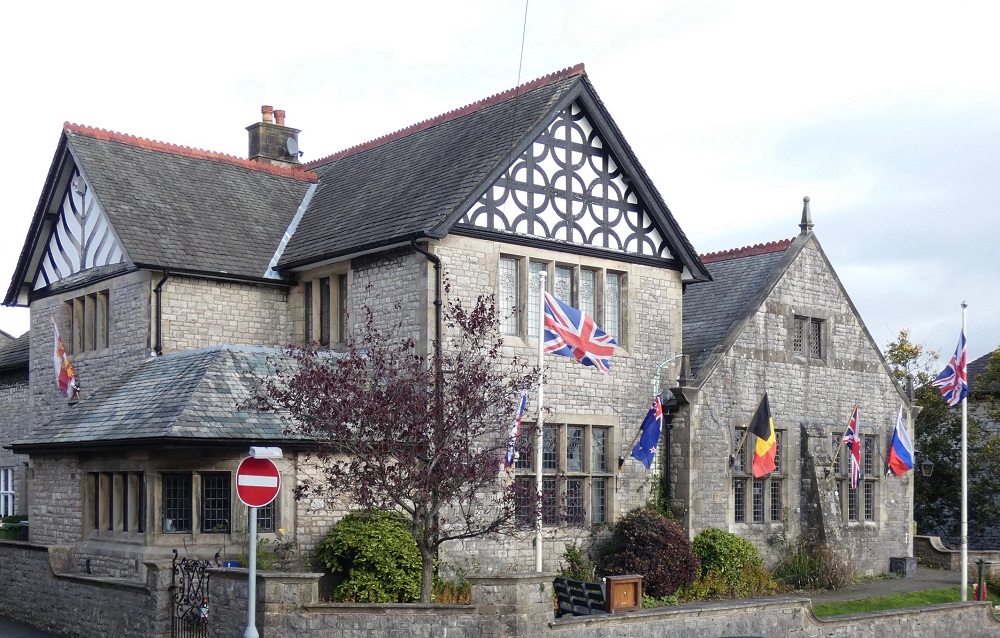 Could you use Lunesdale Hall for a party or activity?