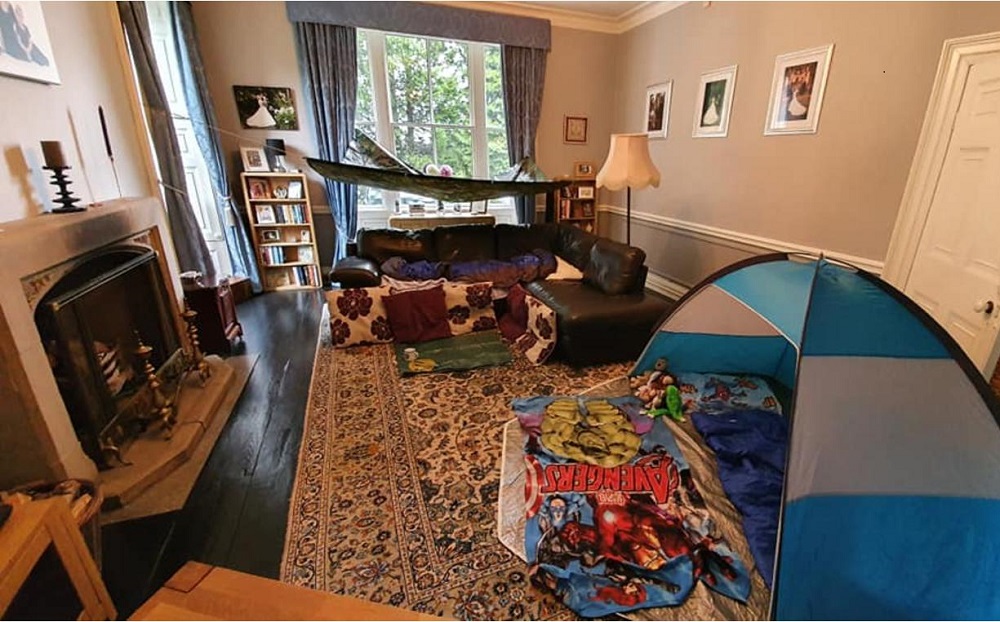 While most clubs and societies closed their doors in March, scouting in Kirkby Lonsdale has flourished in lockdown. With Saturday morning Cub breakfasts, a ‘camp at home’ night under their belt and a family camp planned, 1st Kirkby Lonsdale Scout Group didn’t get upset about Covid 19 restrictions. Instead they got online and creative, as Kirstie Pelling found out…

Scouting is about being skilled up to deal with whatever life throws at you. So perhaps it’s not surprising the Scouting Movement was quickly able to adapt to the new normal presented by Covid 19.

But 1st Kirkby Lonsdale Scout Group adapted better than most. When life gave them lemons, the enterprising pack made pancakes to go with them. Or rather the Cubs did, as part of their online Saturday morning breakfast get-togethers. This new kind of meeting started to take place on Zoom almost as soon as lockdown happened.

“It just seemed the natural thing to keep going really. To provide a bit of normality for everyone when school and sports clubs and everything were stopping; to keep something going they were familiar with.” explains ‘Skip’ Nigel Bradshaw.

But structuring the meetings became a different ball game says Nigel. “You do a lot of games in a normal meeting, a lot of physical stuff, and team activities which are harder over Skype when everyone is separated.” Training sessions like how to tie knots were particularly tricky. “When you have to show someone, you suddenly can’t go ‘Well here’s the rope…’”

So the leaders began trialing and adapting different ingredients. “We did more games and reading stories at the beginning while we tried to figure out what worked. Normally meetings would be two hours long and they are only up to an hour now. That’s to do with attention span as they are really tiring for anyone trying to do it. And we don’t have as many games in them nowadays. We do some games, some teaching of skills and team building exercises.”

Explorer Joe Elliott, who also helps out at Beaver meetings, says he’s been impressed with the variety of activities his leaders have managed to pull out of the hat while on lockdown; including an escape room complete with  knots and morse code. “Kirkby has done really well to do so much. On Wednesday I helped the Beavers with potato printing; they cut shapes out of potatoes and dipped them into paint and printed them onto pillow cases and shirts. There were lots of nice patterns and they got very messy. And we didn’t have to clean it up afterwards!” he laughs.

As the weeks have gone on, Nigel says they have got more confident about what they can do. “In the last few sessions we have been doing traditional teaching of first aid, map reading and all those skills we traditionally look at. So we’ve moved back into almost full blown Scouting really.”

On average they get up to 20 children in a meeting and the learning curve was steep at first. ”You’ve got the typical zoom screen with a gallery view and everyone on it. Beavers might do a bit of craft like colouring in the shape of a hedgehog or get some leaves and glue them on. We needed to work out how to bring people forward to talk about what they were doing. We are getting better at spotlighting their activity; you go round individually and get them to hold their thing up and everyone gets to show off what they’ve done, and feed back.”

Some activities lend themselves to being online. “Because children are on their own they are quiet and are listening; they tend to pay more attention, so there can be short bursts of high attention learning and teaching. You can play word games too. As long as it is all short and sharp and then you get on and do something that is a bit less tiring.” 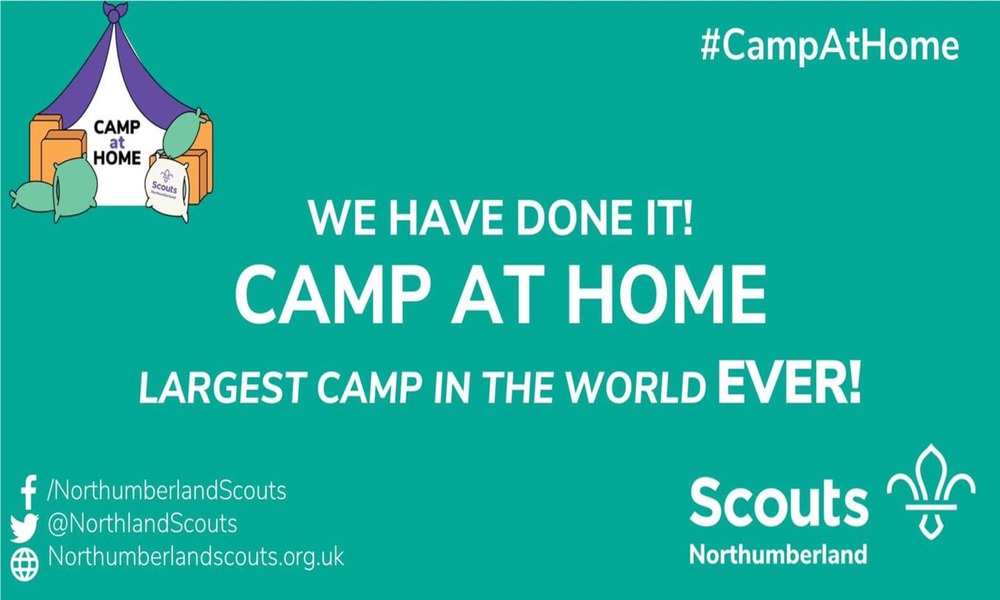 A highlight of the lockdown activities was camping at home. “Northumberland Scouts set up a Camp at Home scheme with a badge and they tried to get as many people as possible round the world to join in and break a world record.” Sixty thousand people registered to camp at home on 30th April, and 1st Kirkby Lonsdale Scout Group was there in full force. “We did it across all the sections; beavers, cubs, scouts and explorers. Some families don’t have access to a garden so we didn’t mind if they were indoors- as long as they weren’t in their bed. although some slept under their bed and that was a bit different. There were all sorts of dens made out of cloth.”

Explorer Joe thought it was great fun. “I built a den out of cushions and blankets in my living room. We all had a big virtual call at the start of it with everyone taking part. Normally they’d choose one of the scouts or beavers to raise the flag but this time Skip had the flag at home and everyone had to use their voices; all shouting ‘Pull’ at the same time. That was really good, and then everyone talked about what they were going to do. One of the groups was making Lego mazes and some were building little camp fires.”

“That all looked impressive,” Nigel adds. ”There was some very interesting use of lights under sticks and iPad fires. We had a private Facebook group running all evening so we encouraged them to share pictures which we showed to all the sections, so they could see what everyone else was doing and be part of the communal activity.” In the morning the leaders wrapped it up with short session before home school started. 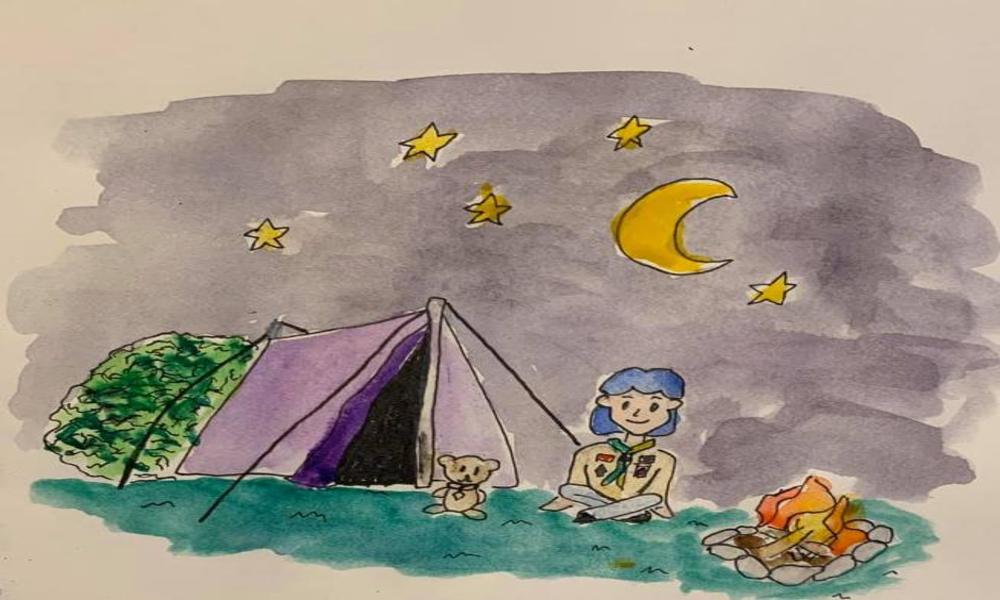 A steep but successful learning curve

Looking back Nigel says it has been a steep learning curve, but a successful one. “We are learning all the time how to do this. We don’t know how to do it. We are making it up. We keep trying things, We keep reviewing what works and we keep altering it. There’s lots of resources online to draw on from lots of the scout groups we can tap into.”

Some leaders weren’t convinced it could be done but Nigel thinks everyone has been converted. “Naturally some were a bit nervous, but they were all up for trying it, and one of them went on to teach people at work how to do video conferencing. Scouts is all about skills for life; going from hard skills like knots and how to iron your shirt to softer skills like resilience, teamwork and leadership. The activities are a way of delivering all that. If we can do it on Zoom then yes why not?”

Above all else, it has helped the pack stay bonded in a difficult and isolating time for most people. “I think there is an issue for all clubs about whether they can pick up again when they get back and I’m sure it will be an issue, but I’m assuming we will go straight back into face to face meetings. We might do a mixture actually, because I do like the ‘mute all’ facility. says Nigel with a smile. “They’re not bad at keeping quiet but it’s not as effective as just pushing a button!”

Stuck for home schooling ideas? There’s loads of activity ideas on the Scouts’Association website that you can work through during with the kids.

Find out how another part of the community has been embracing lockdown with our feature on Kirkby Lonsdale’s Community Hub.